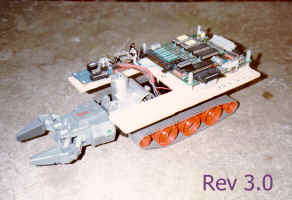 Long ago, pre-kids, I used to dabble with robotics. This photo shows a mobile robot I created and experimented with for some time. I got sucked into packet radio as a method of communication with the robot, and somewhat back-burner'ed the robotics. (56k TCP/IP based packet radio was pretty bleeding edge at the time)

This project has been dormant for years, but it was pretty interesting. The robot was shown at an exhibition at Fernbank Science Center in Atlanta, and was filmed for a short CNN segment. Some details on the robot: