A while back I was curious about the origins of SDP. I started digging into it and found an multithreaded story of two families, several German/Austrian car companies, and a war or two. Dr. Porsche and Dr. Ledwinka both had major involvement in the companies we now know as SDP and Tatra.

Here's the story as I have been able to piece it together. Most of this narrative is documented in bit's and piece's on other web sites and books. But never presented in one thread. I'll try to add references and a timeline, so check back for more info. Anyway, here's the complicated tale.

After designing an electric car for an Austrian company at the turn of the century, Ferdinand Porsche worked for Austro-Daimler as chief designer (The Daimler in SDP). AD was mainly building large sedans, and he wanted to do a small fast car, so he left in a fit for Stuttgart to work for Daimler-Benz (MB). Meanwhile, Hans Ledwinka becomes chief designer at Steyr, also in Austria.

Porsche builds lot's of fast cars for Daimler Benz, but the Daimler board was opposed to small cars, so he left for a brief tenure with Steyr in 1928 (you see the pattern) filling the chief designer role just exited by Ledwinka. Porsche arrives just before the depression hits. Steyr is in trouble, considering a merger with Daimler Benz. Porsche heads back to Stuttgart as an independant designer. Steyr finally collapsed, triggering the 1934 merger with AD/Puch. (Creating SDP as we know it)

The plot thickens...... Ledwinka had proposed a small "people's car" to Steyr in 1921, which the board dismissed outright. He heads back to Tatra. Several small cars were designed and built, with the transition to air cooled engines occuring first, and then rear engine in the early 30's. The T-57, T-77, and T-87 each improved on the previous models aerodynamic, and looked increasingly beetle'ish. Around '36 or so Erich Ledwinka (Han's son) becomes the head engineer at Tatra, and builds the T-97, which is extremely close to the later beetle design. (Including the world's first air-cooled flat four-cylinder engine with a chain-driven single overhead camshaft per cylinder bank). Like most things in this history, the resemblence is more than accidental: 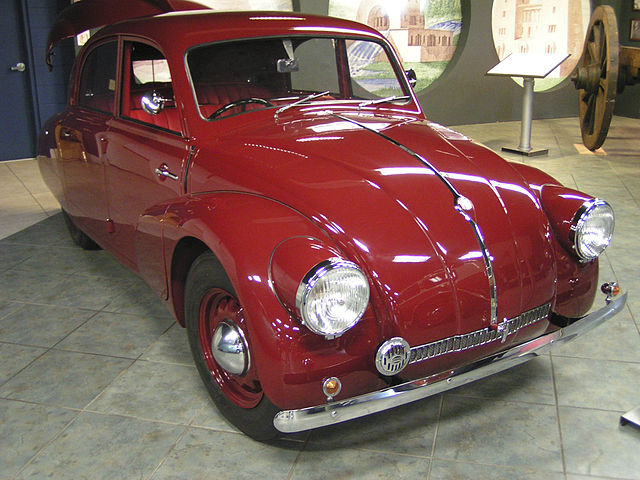 Meanwhile, Porsche's independent design work resulted in two prototype rear engine cars around 1932 for Zundapp and NSU. The NSU was an air cooled 4 banger, the Zundapp a 5 cyl. Neither were put into production due to business conditions and NSU's merger with Fiat.

Both Porsche and Ledwinka were known to have discussion with Hitler about rear engined small cars. Arguably, Ledwinka had built the T97 first, but Porsche was busy designing the beetle utilizing stolen Tatra patents (At least 11 were used). Tatra protested just prior to WWII, with no result. Hitler had a solution for the Patent issue and took over the Tatra factories early in the war. Production of the T97 was discontinued upon Hitler's order too similar to the new beetle design. The first beetles were built and tested in 1937, though resources were diverted to the Kubel and Schwimwagen until post war. Accordingly the beetle was not in wide production until post war.

Not to be left out, Steyr also built a small rear engine streamlined car (The S50/55) which was in production in 1937-1940 or so. It's design: rear engine boxer four! (Surprise) Like the Tatra T97, it also has a familiar shape: 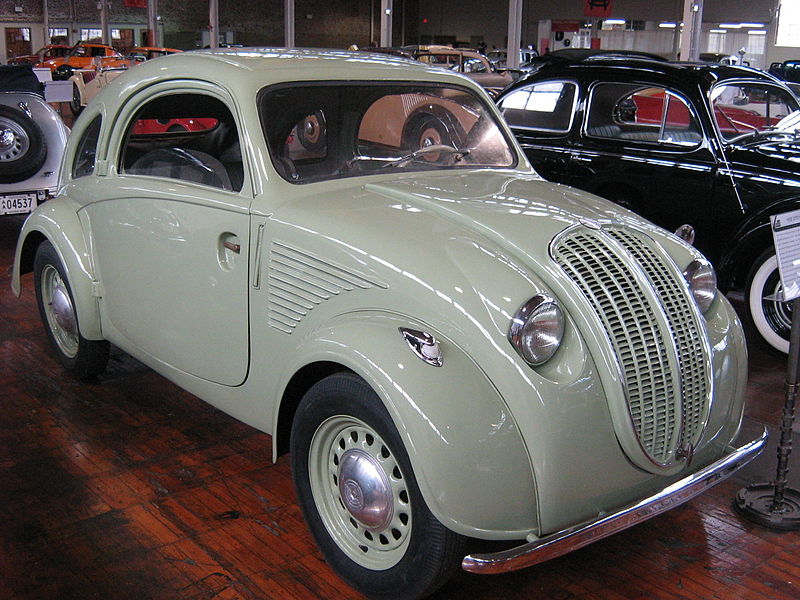 It's unclear who the real designer of the S50 (also called the "Baby") was. Both Porsche and Ledwinka had tenure at Steyr during this period. The engine is usually attributed to Ledwinka, but the rear engine design and body shape were used by both designers. In either case, the S50's production far outnumbered the beetle until post WWII VW production resumed and is viewed by many as the first "people's car". Sure looks like a beetle with Suicide doors! But wait!..... in 1938 the second batch of 30 beetles rolled out with suicide doors, just like the S50!

OK, here's the haffie/pinz connection..... Hans Ledwinka's son, Erich picked up the role of chief designer of SDP in the 50's. Ledvinka senior had retired to Austria after the nationalization of Tatra with the communist takeover. Some references indicate he was back at SDP in the 50's prior to his son, but it's hard to tell. I don't know the exact timing of Erich's start as designer for SDP, but very clearly Hans was accessable to both his son and SDP when Erich designed the haffilinger for production starting in 1958. Just like Ferry Porsche played at AD when his dad was designer, It's also likely that the Ledwinka's had deep connections at SDP. The Tatra patents were still being sorted out, so it's also hard to get a clear answer on what was officially licensed, etc.

The lawsuit  regarding the stolen Tatra patents was re-opened after the war and dragged on for years, ending in 1961 when VW eventually made a settlement paying Tatra a mere DM 3,000,000. Ledwinka never received any money himself and died in relative obscurity in 1967. Porsche later admitted that during the construction of the KdF-Wagen in the 1930s he "occasionally looked over the shoulder of Ledwinka".