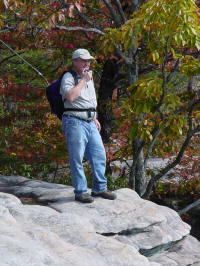 Portable HF operation has been an interest of mine from the first day I received my license. In the late 70's and early 80's, I used portable HF gear to maintain communication from wilderness areas where 2m repeaters & cellphone still do not work.

Being actively involved in Boy Scouts, hunting, & fishing, I'm camping 30 or more nights a year and take advantage of the time to share amateur radio with the scouts as well as chat with friends in the evening.

With the founding of the HFPack yahoogroup by Bonnie KQ6XA, portable operators worldwide have a forum to exchange learnings on antenna's and equipment. Vendors now have offerings specifically for portable operation, which is a first!

There are now many good radios suitable for HF Portable operations. Important attributes are: Power Drain, Compactness, Ruggedness, ease of use, etc.

Other Gear for HF Portable work

In addition to the radio, in many cases you need batteries, antennas, and often backpacks or other ways to carry the gear. This is an area where operators have become quite creative and have repurposed or created new equipment from scratch. Also, surplus military gear is also quite handy.