One of my favorite radios was an ex-military PRC-104 (Sadly, now sold). It's a 25-30 watt HF Manpack with integral auto-tuner made by Hughes and Tadiran. These radios are fairly current and are just now being phased out for newer radios. Most were used with various special forces. Given where my unit was surplused and it's evidence of many amphibious ops, it's most likely it served with the SEALS.

There are many excellent sites with history and specification about the radios. I won't try to duplicate their information, as they have done a great job of documenting nearly all known facts about the PRC-104:

Powering the PRC-104 is quite straightforward. There are two battery box options available:

The PRC-104 is a bit wider than many of the common manpacks. It was designed for the ALICE Pack, and was issued with one. While the Alice pack works and is cheap, I have found some other alternatives I prefer: 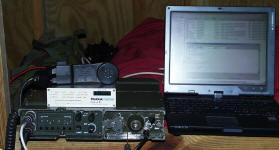 The PRC-104 is ideal for usage with modes like PSK and Pactor, as it is setup already for data. Just throw the switch, and you bypass compression and AGC for use with fsk.

I made a data connector using an old U-229 connector and a keyboard extension cable. I have standardized on the Yaesu/Icom mini-din pinout, and it works well. As both the PRC-104 and the Yaesu 897/857 rigs all have 600 ohm audio it's trivial to interface, no transformers needed. So I have a common connector on all my audio devices, from modems to laptop cables, and even my VIC-1 intercom in the Pinzgauer.

In this photo I'm using the 104 for Pactor. I set this up at Boy Scout summer camp as an experiment. With a low fan dipole I had email connectivity via winlink2k / Airmail for most of a week without recharge. You are only drawing current when checking email, and even checking 3-4 times a day is less than an hour's operation.

With modes like Pactor and PSK you need to set up the audio drive using a watt-meter. Starting with the audio drive from the PC very low, slowly advance it until you have close to full power. Advance it until you do not see a corresponding increase in power level, then drop back until the power level just starts to decrease. This is about optimal.

The 104 is a very easy rig to operate, largely just set the frequency, and go. Audio tones let you know the state of the antenna tuner, etc. Likewise, "clicking" indicates state of charge (below 20v).

The AGC is very aggressive, and sometimes it can make you think the radio is "clicking" when you unkey and there is a strong signal present. But the receiver is quite "hot", and it's reasonably selective, though not a contest rig.

After using modern DSP rigs, you do realize how much the DSP reduces static levels. On a whim I hooked up a $10 Radio Shack DSP/Speaker using the data cable, and it worked great. For demo's it's quite handy. I'll be modifying the RS DSP to take 28v, and will rig up some type of cable to feed it from the radio's battery.

Transmit audio is quite punchy, and there is normally quite a bit of compression. You may have to try several handsets, and Mark KI0PF rates the H-250 as middle of the pack for TX audio. I have swapped between a few, and have 1-2 that get good reports. I also use my favorite H-161 headset for serious operating.

The PRC-104's are quite rugged, and the only work I have had to do involved corrosion from military service near sea-water. The radio is completely gasketed, so inside mine was fine. But the audio connectors & knobs were very corroded, and the faceplate was starting to show corrosion where the paint had worn. When a decade switch became finicky, I looked for some help.

Jim KA8TUR fixed me up with a new circuit board, connectors, and knobs. I disassembled the faceplate, cleaned up the corrosion on the faceplate itself, and repainted with the correct 34052 paint. (Mine was in the Marine green colors). It made all the difference in the world, and the radio operates great with the newer decade switches and knobs.

I need to use either a lacquer stick or draftsman pen to redo the lettering. I tried a Pentel paint pen. It worked OK, but the lacquer stick is the best way to go it appears.

Hints: The clear plastic lens over the decade switches can be removed very gently. A little plastic polish will help. Make sure you use a glue which will seal the faceplate, but not fog the plastic. It's important it's sealed as that keeps moisture out of the decade switches.

The faceplate gaskets are often torn, oxidized, etc. It's not that hard to make another out of rubber or neoprene. The side covers have an O-ring, and these survive better. A little silicon grease will help them seal.